Sports technology is a rapidly growing trend and, with Weightlifting/Sport Training being no exception, there are multiple devices on the market to measure barbell acceleration and velocity.

The most classic example is a Tendo unit that measures barbell data using a string attached from the barbell to equipment on the floor. It’s an effective method that is popular in research and weight rooms however, it’s fairly expensive (~$1500) and has involves equipment that can be impractical to use.

A new wave of devices is emerging focusing on ease of use for both equipment set-up and feedback to the user such as the FORM Lifting collar and the PUSH band. These devices use internal accelerometers with couple with software algorithms to identify and quantify barbell motion data. I haven’t tried either device personally but am interested in the concept so I decided to try to make my own. 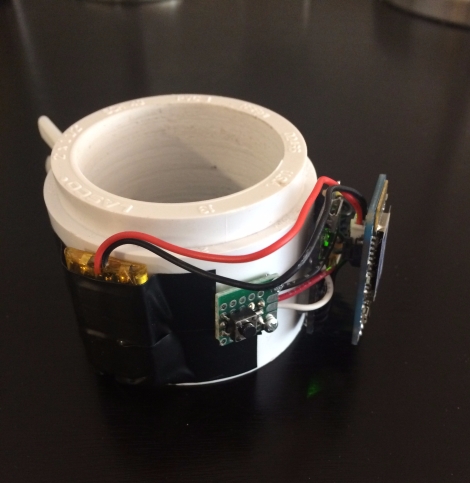 Two different views of the barbell collar I made with built in sensors. The device is a combination of a microcontroller, accelerometer/gyroscope, Bluetooth transmitter, start button, and a lithium Battery. The device communicated via Bluetooth to my laptop with a script written in Python and the data processing and analysis was done in Matlab.

Sampling rate of the device was ~90 Hz and the data was filtered with a 4th-order butterworth filter at a cutoff frequency of 6 Hz.

To test out the device, I used myself as a subject. I’m a fringe national-level athlete and have a good proficiency with the lifts but am by no means elite. Fair warning, and apologies weightlifters, I did this experiment at a CrossFit gym and had to use freedom units (pounds) as opposed to kilos.

The vertical bar velocity profile of selected reps, from lift-off to maximum bar velocity, is shown in the graph below (Figure 1). Each trial was displayed as 0-100% of the total pull time to allow the acceleration patterns to be directly compared.

Immediate Observations Based on Comparison: